ranger is a console file manager with VI key bindings.

It provides a minimalistic and nice curses interface with a view on the directory hierarchy. It ships with rifle, a file launcher that is good at automatically finding out which program to use for what file type. 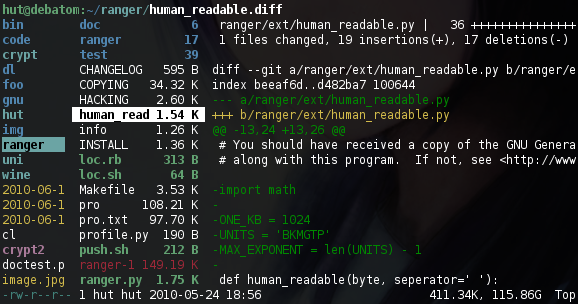 On May 19, Freenode staff lost their control of the network. This has been developing for a while and staffers set up Libera.Chat in case it happened. Foss revolves around people volunteering their time, as did the Freenode network. We have decided to move the #ranger channel because we believe the volunteer staffers have our best interests at heart.

The king is dead, long live the king!

Version 1.9.3 is out, fixing some crashes. Introducing Űberzug image previews and duplicate filters for filter_stack.

Version 1.9.2 is out, fixing some crashes due to Python 3.6/3.7. Introducing native Kitty image previews and a dired-filter inspired filter stack.

Finally, the much requested feature to integrate ranger with docker has been implemented! Simply install docker and type:

Et voilà! You now can enjoy ranger in a freshly baked docker container! :)

Toon Nolten is now helping out to maintain ranger! :D For that, he was given full git access. We are now a team of four (Vifon, nfnty, Toon and hut.)

I changed the website design to resemble the interface of ranger :)

The URL for the ranger website has changed from http://ranger.nongnu.org to https://ranger.github.io. An automatic redirect has been set up. Reasons for the move are: